The day that I opened my acceptance letter I was in small college town studying for finals, writing my thesis, directing a play, and acting in two others all the week before going graduating. I received the letter in the middle of what seemed to be a hurricane. I opened it to discover that I had the opportunity to work in Spain, in a small town outside of Seille called Albaida del Aljarafe.

I didn't know what my first day would be like at San Sebastián primary school nor how Spanish primary schools worked. Are the students going to understand me? Are they going to respect me? Are they interested in English? What do they think about a foreigner en their school? Upon entering the school, each one of the students wanted to meet me. Their interest in the world and my background energized me. Since that day I continue enjoying the opportunity to share my culture and my language with them.

A day in the life of an auxiliar de conversación in San Sebastián  is fun. Whenever I enter a class all the children know that Teacher Gus has come to play games, share stories, and be a stickler for pronunciation. A typical class consists of reading a little and then a game. I love games, especially those that require the participation of everyone. 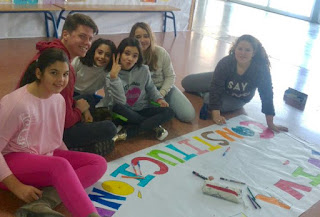 With the older kids, my favorite games has to be "Blind Word". A student sits in front of the blackboard, I then write a vocabulary word in English behind the student. The rest of the students have to give clues in English so that the other student can guess the word. If they know the word and pronounce it well, one point for the students, if not, one point for Teacher Gus. This dynamic creates les competiviness between students and is excelent for listening and speaking English. The students realize quickly that they need to know the English vocabulary in order to help their classmate. Everyone pays attention to what teach prior to the game so that they can win. It brings me no shame to say that I have never won this game.

The younger kids love the game "Simon Says". I say, for example, "Siman says brush your teeth" and the students have to do a gesture of someone brushing their teeth. If I don't say "Simon says" or a student does the wrong gesture, they sit down. While the rest play, those that are seated continue to listen and to make the gestures to prepare themselve for the next round. It's a listening that motives the students to pay attention to what I teach before the game (like Blind Word). Games help me teach English because they require listening, communicating, and thinking in English in a fun way. 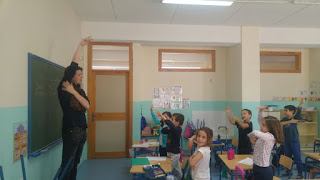 Before and after my time in the classroom playing games, the student as are teaching me (unbeknownst to them). I've learned that a "patata" can mean heart as well as potato or that their is no sport more important than soccer. They taught me Sevillian Christmas carols during Christmas and the story of the three kings. We don't celebrate a three king's day in the USA, so when I went to the annual parade that happens on three kings day, I felt like a kid going for the first time.

My students aren't the only ones learning. They don't know that outside the classroom I'm constantly trying to speak in a different language. I hope my students find the same confidence. Sometimes I wonder if my students know that I've had to learn another language in class like them. I know that it can seem boring and useless, but I make it clear that it's worth it. To be able to live and communicate in a foreign country is one of the best things I've achieved in my life. It's more than grammar and dictionaries. You learn a language to get to know others and continue learning what there is in the world: parades that shower candy and legs of jamón, how to clap along with a Sevillian Christmas carol, or how to talk like the Andalusians. 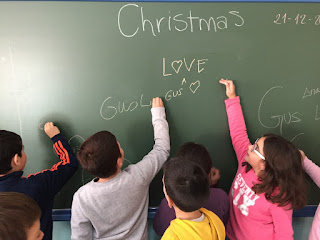 I've enjoyed this job more than I could have imagined. 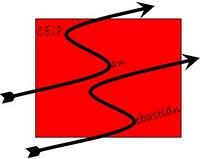